The 2019 Super Bowl Ad Awards For The Non Poetic 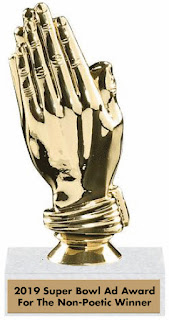 Welcome to the 2019 Super Bowl Ad Awards For The Non-Poetic! Super Bowl LIII is history, the Patriots are once again Super Bowl champions, America is throughly sick of Tom Brady, and it's time to reveal our judging panel's (me and Office Dog) favorites from this year's crop of Super Bowl ads.

Note that, while everyone has their opinions of the best and worst, funniest and failures, award winners and money wasters, noteworthy and not worthy, our honors may stray wildly from the standard accolades for Super Bowl ads. Our goal is to recognize the Super Bowl ads that stuck, the ads that sucked, and the ads resonated with the person who watched the game first, the commercials second, and had a beer or two while actually enjoying the entire show (from the viewpoint of an advertising guy who worked Super Bowl promotions in bars for 15 years). So, without further non-poetry…

The A For Execution But... Award
Olay went all in in this year's Super Bowl with a TV spot and quarter sponsorship. While a women's face cream buying into the Super Bowl was interesting to see, their spot left just a bit to be desired. Titled and hashtagged Killer Skin, the Olay spot brought us Sarah Michelle Gellar and wove in themes from her turns in Buffy the Vampire Slayer and I Know What You Did Last Summer. Ultimately, however, the problem was it was too busy, too loud, and too convoluted to get the brand message across.

The Office Dog Honors Award
This award honors the best use of animals (preferably monkeys) in Super Bowl ads. However, monkeys seem to be passé in Super Bowl advertising these days and, apparently, so are dogs or animals in general, though WeatherTech did feature some good dogs in their ad highlighting their PetComfort line of products. However, though he didn't do much, Budweiser's ad featuring one of their dalmatians with his ears flapping in the wind did the best job of  scoring all the warm fuzzies with a dog in a Super Bowl ad this year…

The WTF Award
In a year filled with plenty of WTF moments (looking at you TurboTax), Mint Mobile took the prize for their lame attempt at creating a Super-Bowl-wacky-buzz ad touting chunky style milk. In the process of the attempt to memorable, they kinda forgot about the purpose of spending big bucks on Super Bowl ads. You know? That whole promote your brand thing…

The Best Ad Only Hardcore Football Fans Completely Got Award
I thoroughly enjoyed the NFL's 100th Anniversary ad. It was wildly entertaining with humor, action, callbacks to some of the league's most memorable moments, and a nod to some of today's current and up-and-coming superstars (hellloooo Baker Mayfield!). The problem was, it was too much. Too many faces, too many cameos, too much action, and a superfluous appearance by a female football player crammed into two minutes and, on top of all that, the casual fan likely didn't know half the players or moments noted in the spot. It was still a great spot that will merit a few more views, but a little more restraint could have created a much better spot…

Best Pointless Use Of A Pointless Celebrity Award
An incredibly huge field of candidates in this category this year. Planters Peanuts ran a great ad that would have done just fine without the pointless appearance of Charlie Sheen and Alex Rodriguez. Colgate's unoriginal, let-try-to-be-buzzy spot featuring Owen Wilson was also celebrity endorsement money that was thrown down the drain (and Seinfeld did that bit 20-something years ago). All of Pepsi's ads with Steve Carell and others just sucked. Bubly Sparkling Water ran a fun ad featuring Michael Bublé that was actually a nice tie-in. However, like Bublé's music, it will be quickly forgotten. And, while Amazon likely got the biggest bang for their buck with their mish-mash ad featuring Harrison Ford, rather than promoting it, the ad actually highlighted all the concerns people have with virtual assistants like Alexa (the ad they should have run, featuring just Harrison Ford, ran after the game).
But those pointless celebrity appearances all paled in comparison to Burger King's ad, which featured Andy Warhol (who died in 1987!) silently opening a Whopper, pouring ketchup, and then dipping the burger in ketchup. The big payoff was the lame hashtag #EatLikeAndy. The clip they used, called "Andy Warhol Eats A Hamburger," was licensed from a documentary film called 66 Scenes From America. It actually could have been so much more, but ultimately Burger King simply wants us to eat like a man who's been dead for 32 years…


Honorable Mention
Stella Artois got lots of nostalgic buzz for their spot that brought back Sarah Jessica Parker as her Sex in the City character Carrie Bradshaw and Jeff Bridges reviving his Jeffrey The Dude Lebowski character from The Big Lebowski. In the end, however, the ad came off as a cheap, uncreative, too over-the-top hook designed solely for max Super Bowl hype. It was already forgotten by the end of the game.

The Water Cooler Winner
There was no debate on this one and it was pretty obvious from the moment it ran who our Water Cooler Award Winner would be. Floating above a sea mediocre ads that just tried too hard or missed the mark, the Bud Light/Game of Thrones ad is what everyone is going to be talking about around the office water cooler on Monday. Bud Light had already set things up with their amusing No Corn Syrup spot (though it won't matter to most beer drinkers, Bud Light did a good job hammering that message home with a couple other spots during the game), but the follow up, starting with typical Bud Light wit, took a very dark, violent, and surprising turn to segue into a fiery reminder that a new Game of Thrones season starts soon on HBO. This is what a Super Bowl ad should be. It was fun, light, unexpected, and very memorable. Nice job and, yea, I'll say it… Dilly Dilly!


So, there ya' go... my take on the Super Bowl ads for 2019. Some good, some bad, some creative, some cliché. Feel free to leave your thoughts, picks, pans, favorites and failures in the comments. And, until then, when does the 2019 football season start?
Posted by Ph Communications at 2:26 PM