Is Your Advertising Keeping You Ahead Of The Pack? 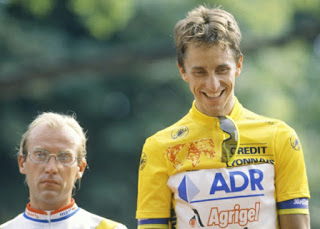 Though this year's Tour has had controversy and crashes, drama and just plain dull moments, I've found myself thinking back to the 1989 Grande Boucle. That race was won by American Greg LeMond (on the right in the photo), who overcame 50 second deficit to beat Frenchman Laurent Fignon (left) by eight seconds on the Tour's final stage. To many, it remains the most thrilling Tour ever.

Though LeMond became the first American to win the Tour in 1986, the two seasons that followed were derailed by injuries and a hunting accident. Aside from one 2nd place finish in a Giro d'Italia time trial, his early form in 1989 left many thinking his best days had passed. And, as he was racing on a lower level team that lacked a capable cast of supporting riders, few considered LeMond a Tour contender.

LeMond served notice in the race's first week that he was on form and the tour became a battle between LeMond and Fignon. For the next two weeks, the two men traded the lead several times. LeMond, using then new triathlon-style aerobars, was faster in the time trials while Fignon, better protected by his team, was slightly stronger in the mountains. Though LeMond won the last mountain stage, Fignon reached Versailles with a 50 second lead and a 15.2 mile time trial separating him from the yellow jersey on the Champs-Élysées in Paris.

Given the length of the time trial, just about everyone, Fignon included, felt that 50 second lead was insurmountable. Undaunted, LeMond entered the start house that day with the aerobars on his bike and an aero helmet on his head. Fignon, ever the playboy, chose to ride triumphantly into Paris bareheaded, with his ponytail blowing in the wind, on a standard time trial bike. Though he crossed the finish line in Paris with the day's third best time, Fignon still finished the stage 58 seconds behind LeMond. In doing so, he lost the Tour he assumed he'd won by the closest margin in the race's history. In other words, via his hubris and his overconfidence, Fignon took his foot off the gas.

If your business requires advertising and promotion, then make sure to learn from Fignon's mistake; don't assume anything and don't take your foot off the gas when it comes to your marketing and advertising plan. Just because some form of media has always worked in the past, doesn't mean it will work tomorrow. It's one thing to set up a yearly ad plan and put it into motion, but that plan also needs regular attention to insure that you're marketing dollars are being well spent and that you're getting a decent return on your investment.

Further, keep abreast of your competition's adverting and promotions to see where they're gaining an edge. If you see one element of your marketing plan, be it TV, radio, print, outdoor, digital or social media, is reaching a point of diminishing returns, don't hesitate to re-allocate your spending to maximize your effectiveness. Remember that, in business (as in cycling) no lead is ever truly safe.

At this point, I know some of you are likely asking "When can I find time to do all that when I've got a business to run?" And the answer is to do exactly what LeMond did and embrace new technology in your every day business life. Just as LeMond won the Tour thanks to his aerobars and aerodynamic helmet, you can streamline your marketing and advertising too. Automate your email marketing and rely on templates for quick and easy email responses. Use a scheduler for social media posting and your cell phone (or designate someone) to monitor interactions. Recycle blog content into marketing emails. Reference industry news and updates for your own blog content. Then, simply designate a little time each week or month to review all your traditional and new media marketing efforts and assess (or re-assess) accordingly via phone, email or from your tablet or laptop.

Though he'd revealed he was dealing with a painful, likely abscessed saddle sore, Laurent Fignon's belief that he couldn't be beaten and his failure to embrace new technology meant he metaphorically let up on the gas and stopped pedaling. And, if you're being pursued by the competition, you can't ever stop peddling your business. Remember to stay on top of your marketing, make tweaks as needed, embrace new approaches and tools to keep your marketing and advertising wheels spinning. It's an easy way to keep your business ahead of the pack in every stage and every race.
Posted by Ph Communications at 12:40 PM No comments: