Of Bikes And Butt Advertising

If you've looked around He's Not A Poet, you may have noticed me occasionally waxing non-poetic on bicycling and pro bike racing. And now that the 2010 Tour de France is almost upon us, it's time for my annual post on what pro cycling can teach us about advertising (OK, this is only the second year I've done it but, after this it will be a yearly post, deal?).

To review, the Tour de France is essentially one giant, rolling advertising vehicle. Everything has an official sponsor, from the official drink to the official timekeeper, to the podium girls who present the flowers and trophies to each day's jersey winners. 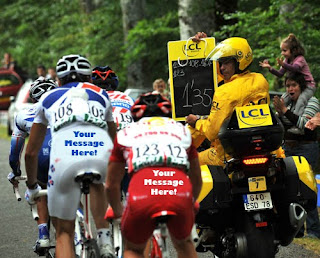 Even the towns that host the start and end of each day's stage pay to show off their civic attractions to the world. And just like in Nascar, pro bike riders and their bikes are covered in logos. How much you pay for sponsorship dictates where your name goes and how big it is. Smaller sponsors get a logo on the jersey and maybe on the bike. The name sponsors get their name on the team and, most importantly, the jerseys and the butt of the shorts...

The "Butt Sponsor" is valuable position to have, since most bike race stages feature a breakaway of some sort with some riders going ahead of the pack, and much of the TV coverage of those riders is shot from the TV motorcycle that stays behind the lead riders, transmitting images of their butts. Thus, since advertising is all about impressions, if your rider gets out in a breakaway, there are more chances for your brand to be seen repeatedly by the millions who watch the Tour. Even if a rider or team has no chance to win the overall race, just having a rider lead or even win a day's stage can generate enough exposure for a given brand to justify the expense of the sponsorship. And that's why, for the companies who sponsor the Tour de France and its' riders and teams, this race is essentially the Super Bowl of cycling, a once a year opportunity to market your brand to the biggest target audience possible.

So what does any of this have to do with your advertising? Well, though you may not be a cycling fan, or even French, odds are your company has a chance to be a butt advertiser, or one opportunity where you can drop a big hunk of your advertising budget to make a really big splash. The question is, is that opportunity worth it? Will the money you spend in July translate to business in November? Is your brand strong enough that one big, butt advertising opportunity will create enough impressions to generate a return all year round? Or, should you let that big opportunity ride away and instead concentrate your ad money on a 12-month marketing plan that will keep your sales rolling throughout the year? Just as every bike rider and team has different strengths and weaknesses, every business has different marketing needs. So remember, a butt advertising opportunity can make a big impression but, it won't do you any good if it's not still turning your sales wheels at the end of the race...
Posted by Ph Communications at 10:40 AM