As I write this, April Fool's Day 2010 is almost over. And, though I've never been much for April Fool's shenanigans, April 1st always brings to mind a piece I did during my term as Copywriter/Advertising Coordinator for Glamour Shots. This was during the heyday for Glamour Shots, when they couldn't sell franchises fast enough, every mall wanted to lease them a corner location, and going to Glamour Shots and having a professional stylist and photographer bring out your inner beauty in glamourous photos was seemingly a must for every American female between the ages 18 to 80.

Part of the Glamour Shots advertising strategy at the time was to include a small "before" and large "after" shot. In addition, the copy highlighted what was euphemistically called "a professional makeover and photo session." This was, in reality, a long, three to four hour ordeal where a woman's face was essentially spackled over to hide any and every flaw, and wardrobe was chosen to hide any further flaws and/or accent any positive characteristics. Then the woman got to enjoy a professional photo shoot, where she was posed, positioned, prodded, and otherwise contorted in an effort to capture her best side (with big hair and layers of makeup), her inner beauty, and to sell her a bunch of photos.

So it was in 1992, at the suggestion of the owner of Glamour Shots and his wife (who, though not a GS employee, was essentially our Creative Director), we designed and produced an April Fool's Day joke ad for the amusement of all of our store owners. The gist of the "ad" (seen below, click on it for a larger version) made fun of the whole, arduous Glamour Shots' process, used a pic of a dog as the "Before" photo, inserted not one but four asterisks to correspond with fine print copy, and then loaded the fine print with everything we all secretly felt about Glamour Shots. And, at the very end of all the fine print, we even tipped our hand and wished everyone a Happy April Fool's Day. 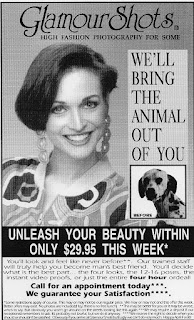 To make it even more obvious, we sent out a cover letter with the faux ad dated April 1st, where we delineated how we came up with the "perfect Glamour Shots newspaper ad" by watching "Wheel of Fortune" reruns while closely observing only the shots featuring Vanna White. We even mentioned the factors we considered in developing this ad, including "the relative bigness of the model's hair in her before photo compared to her after photo." Ultimately, everyone thought it was pretty funny and we received plenty of compliments from amused Glamour Shots owners. Except for...

The Glamour Shots location in Laredo, TX was fairly new and, being in a mainly Hispanic market, they were trying very hard to tow the company line and essentially translate the Glamour Shots experience into a different culture. But, what they didn't do was read the fine print. Or get the irony of our cover letter or the ad. And, you guessed it, as they were blindly following what they'd learned during their Glamour Camp training, they ran the April Fool's ad in their local paper without a second look.

We got wind of it when a Laredo gay/lesbian newspaper called the corporate ad department looking for comment. While they didn't get much from us, they still had plenty to run with, and their story ran quickly thereafter. In the end, other than the store owner and manager's pride, no one was directly hurt, though the harsh truths we pointed out in the ad likely did serve to dissuade some customers who might have been on the fence about coming to Glamour Shots.

So, what have we learned? While it would be quite easy to let this be a puritanical lesson on the perils of April Fool's Day tomfoolery, instead, just remember that everything you put out for public consumption, be it a newspaper ad, TV or radio spot, direct mail piece, press release, or even a Twitter tweet or Facebook posting, can come back and bite you if you're not careful about what you say and how you say it. Don't assume your customer will read the fine print or the bold print for that matter. Don't even assume your customer will "get it." Craft your words carefully and make them count, so that you get the most from your advertising message, on April 1st, and every other day of the year!
Posted by Ph Communications at 11:42 PM