What's In A Name?

I'm sure this has been said by many people and many ways but...
There are goods and services in this world that can actually sell themselves. Everything else needs an ad agency...
I'm a beer snob and, thanks to my brother, whose brother-in-law owns Boulevard Brewing in Kansas City (they're married to sisters), I've had occasional inside access to what's become one of the largest microbreweries in the midwest. In addition to enjoying some of their beers before they hit the market from time to time, I've also had the opportunity to chat about their advertising and marketing strategies over the years. While of most of their efforts have been pitch perfect, one recent incident illustrates the importance of product naming, marketing, and market education.
First off, let me state that the "Boulevard" brand is now almost synonymous with "beer" in Kansas City. Their model has been to introduce a beer and let it ride until the market discovered it. Though their product was beer, their larger marketing effort was emphasizing the brand. With that, theirs was not an overnight success and it took a while for the beer, and the brand, to take hold. Now that it has taken hold, their sales have exploded.
In early 2008, the company introduced the Smokestack Series, a series of lesser known beer styles that had often been brewed in small batches and sold only from the brewery. The line consisted of Double Wide Pale Ale, Long Strange Tripel, Sixth Glass, and Saison. Now, look again at those titles and tell me which one doesn't fit. If you said "Saison" you're right, and the market agreed because, of the four, Saison was the worst seller.
("Saison" is the French word for "season" and saison beer was originally brewed in French speaking southern Belgium during the cool winter months for consumption during the warm working season on the farm. )
Undaunted, Boulevard then produced a short run of a variation called Saison Brett (Brett being short for Brettanomyces, a strain of yeast generally considered bad for wine and beer, but used for some Belgian style beers, such as Saison, to provide a gentle bitterness). This one, again while popular with beer snobs, didn't catch on with the general public.
When Boulevard decided to add still a third saison variation, they contacted their ad agency for research and marketing advice. What they found out was, though saison may be a familiar term and beer style to beer snobs, it's not so accessible to the average, midwestern beer drinker accustomed to being able to order a wheat beer or pale ale. In fact, Boulevard's market research showed part of the problem was no one knew how to even properly pronounce saison and hence, not many bothered to buy it.
So, with the help of their ad agency, Boulevard simply gave their third saison (though technically it's not a saison due to the way it's brewed, but that's another story) version a new, more accessible name, graphic theme and marketing campaign. The new variation became "Tank 7 Farmhouse Ale" and suddenly, it's one of their faster selling beers. 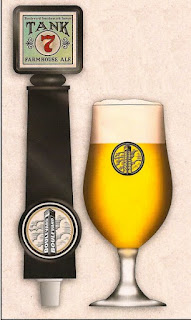 What have we learned (aside from some useless beer minutiae)? Well:
1) Name does matter
2) Lack of market education can easily lead to market confusion and/or indifference
3) Even the best product, service, and company can use the services of an advertising/marketing agency
Finally, my challenge to you is to look at the name and message of your company, product, or service. Does it help you sell? Is it memorable? Does it promote to and/or educate your market?
If you answered "no" to any of those questions, then take a lesson from Boulevard Brewing and remember that a customer can't name their poison if they can't say or even remember the name...
Posted by Ph Communications at 9:48 PM